From Portable to Precast Concrete

Public and private schools across the country have a growing situation to solve. While increased enrollment benefits a school, filling classrooms beyond capacity is not conducive to a positive learning environment. Some schools have expanded with portable buildings placed onsite. Although functional, these buildings are not always aesthetically pleasing or safe during inclement weather and the long-term costs from multiple replacements are a factor. 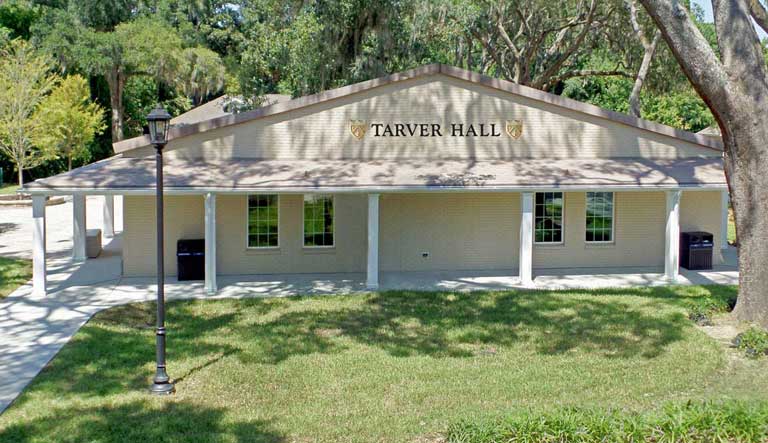 Even elite schools — like The Bolles School in Jacksonville, Fla. — have had to expand with portable buildings. Bolles added three modular trailer-type buildings to its Middle School Bartram Campus in the 1990s for needed classroom space. The campus underwent another change in 2016 when the structures were replaced with a unique custom-engineered precast concrete solution to create the new science and technology building, called Tarver Hall.

The college-prep school, founded in 1933, has 1,600 boarding and day students in pre-kindergarten through grade 12 on four campuses. This internationally recognized school is the only independent school in the area with a separate campus for sixth through eight grade students. The Middle School Bartram Campus sits on 24 acres along Pottsburg Creek. This campus originally was Bartram School for Girls, which was founded at this site in 1938 and became part of Bolles in 1991.

The new building was funded by a $1 million anonymous donation. Project requirements included that the building be completed during summer 2016, when students were not on campus. Although 24 acres is an expansive site, the administration wanted the building to be positioned in front of the notable Pratt Library and to match the aesthetics of other campus buildings. At this location, however, stood oak trees with expansive root systems that would have been directly impacted by construction. The building was also required to meet or exceed building codes, wind loads and wind standards. Florida additionally has some of the most stringent codes in the country because buildings have to stand up to hurricanes.

Leesburg Concrete Co. Inc., of Leesburg, Fla., drew from its 30 years of experience in the education market to take on the challenge. An Easi-Set Building licensed producer, the company embraced the project as an opportunity to put its innovative and technology-driven savvy to the test. 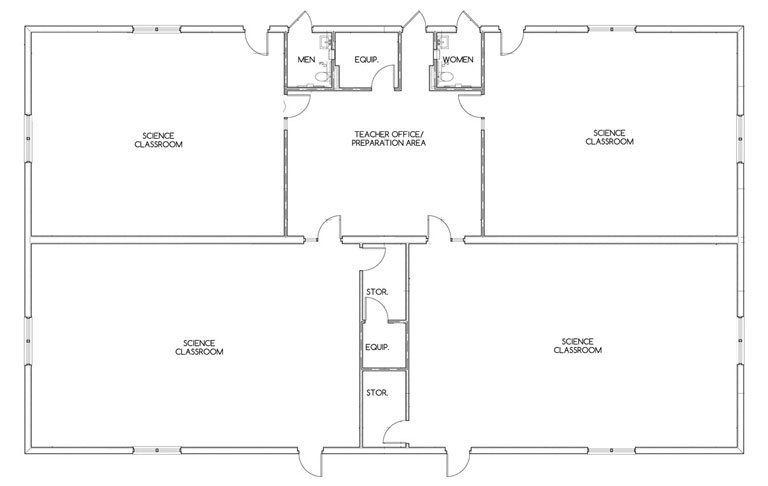 As facility manager for the school, ARAMARK’s Melvin Morgan sees to it that the school is maintained and operating efficiently. Morgan approached Kirk Rouse, vice president of Leesburg Concrete, about replacing the portable structures with something permanent. “[Morgan] asked [Leesburg Concrete] to match the existing aesthetics on campus with high architectural finishes and features,” Rouse said. “What we came up with is a highly custom-engineered building that began with a precast concrete floor and went up from there.”

The new Easi-Set Building measures a comfortable 94 feet by 56 feet in size. Its classroom module includes structural concrete walls with a flat panel, post tensioned concrete roof, while the base features a specially engineered gravel pad under the precast concrete floor. This type of floor was selected because the built-up granular sub-base with the building set above left the existing oak trees unharmed.

Rouse noted that an extensive amount of site preparation had to occur to ensure the project wouldn’t impact the trees. “The site was so tight, at times a crane sat 7 inches from an existing building,” he adds.

Other buildings on campus feature brick exteriors with a shingle roof and ornate white columns at the entrance, and every effort was made to manufacture the new building in this distinctive style. For instance, the size of the existing brick wall was matched precisely so the precast wall panels have this same brick aesthetic. This was done using a brick form liner, and the panels were painted with a matching color. White exterior columns were made from structural steel wrapped with glass fiber reinforced concrete. The existing campus structures have three-tab shingle roofs, so Leesburg Concrete recreated them — out of concrete. The classroom module consists of 96 total precast roof, floor and wall panels. 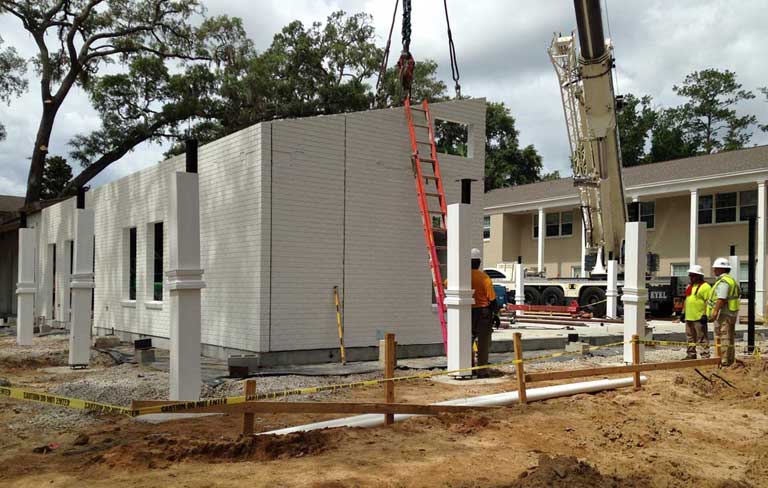 “We bought matching shingles and laid them out in our facility, creating our own custom form. We then colored the precast to match,” Rouse said. “To minimize roof deflection, we used an internal post tensioning system and applied a second series of post tension cables in the field.”

Beyond aesthetics, the new building is strong and rated with withstand 175-mph winds, exceeding current wind-load requirements. Florida sets the bar for high wind standards because the state has been damaged by hurricanes in the past 20 years. To reduce devastation while recognizing that not every area of Florida faces the same hurricane risk, the wind-load requirements vary throughout the state.

Project requirements included that the building be completed during summer 2016, when students were not on campus. The building was also required to meet or exceed building codes, wind loads and wind standards, and the project could not impact existing oak trees on the site. 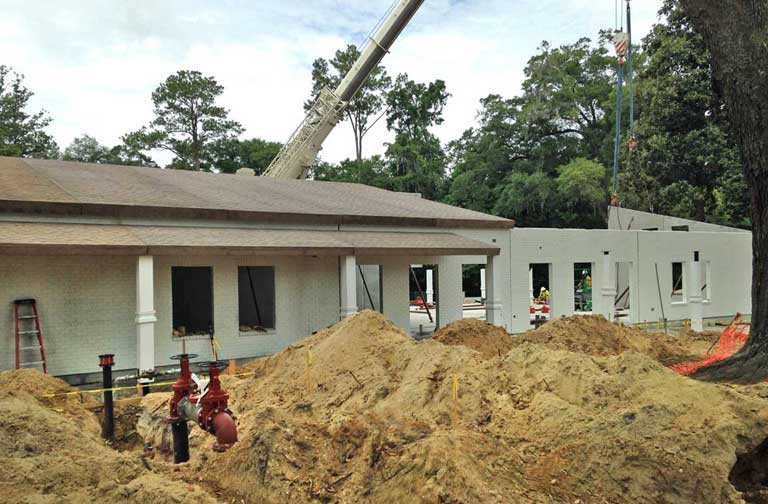 Schools in high-wind zones have special building considerations, but structures across the country can use precast concrete buildings to address their own environmental conditions. Easi-Set and Easi-Span precast buildings, made by Midland, Va.-based Easi-Set Worldwide, for instance, are composed of 100 percent concrete with UL-752 level 5 ballistics-resistant components, and many larger buildings are certified by third-party engineers.

Precast concrete buildings are available with a range of interior and exterior outfitting options, including HVAC, lighting, plumbing and electricity. Further customization is available throughout a building from the walls to the roof and the floor. Different textures and colors allow design goals to be achieved. 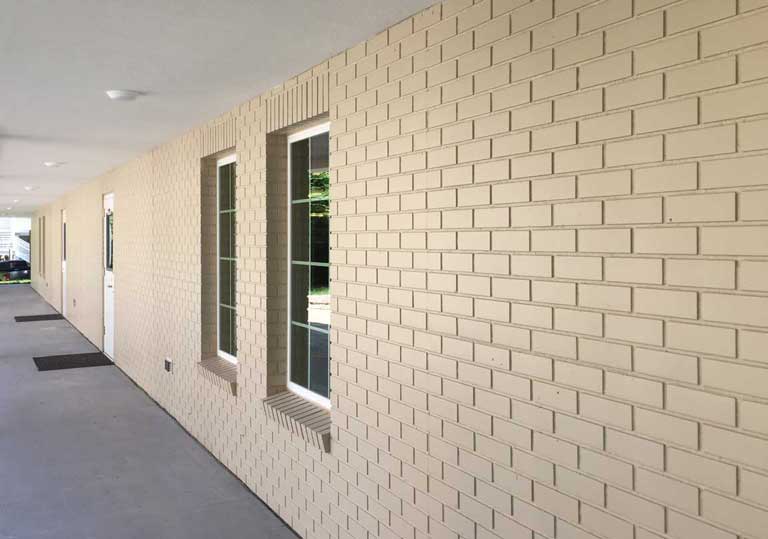 “Just like at the Bolles Middle School, aesthetics can be matched or something totally unique can be created,” said Chris Reese, an engineer with Easi-Set Worldwide. “Customization is something that Easi-Set producers do so well, and they work with each customer to ensure a building is a perfect fit for its environment.”

Compared to other structures, precast concrete buildings can be installed faster. The length of time depends of the size of the building, but a typical install takes days, not weeks. Costs are less than other building methods because precast concrete is an efficient and fast way to build, saving time and money during the manufacturing process and on a jobsite.

School officials should consider that Easi-Set Buildings are available for a wide range of campus needs, including classrooms, concessions stands, dugouts, restrooms, storage facilities and more. They also should note that not all manufacturers create structures to the same level of quality. Building owners should work with producers and their design team to compare manufacturers’ practices, testing and capabilities to ensure quality standards are met. 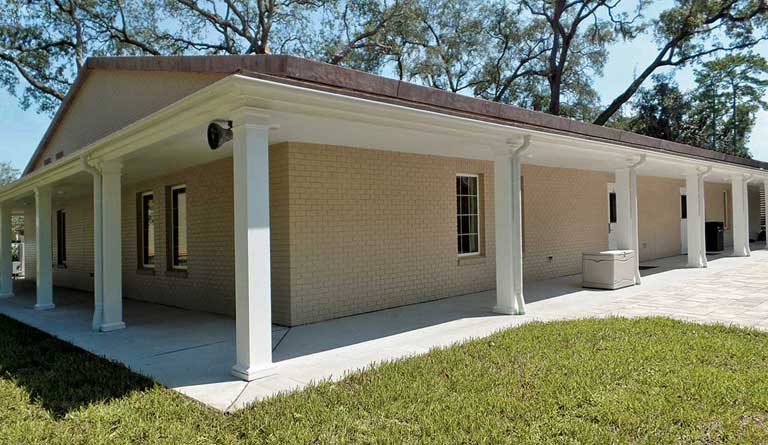 At Bolles, the team had 70 days to complete the entire project, so it was ready for the start of a new school year. The site prep alone took three weeks. The fully fitted and landscaped Tarver Hall met the completion date on time with the structure set in less than three weeks.

Leesburg Concrete has manufactured many precast concrete buildings, but this truly unique facility showcases the staff’s level of experience and ingenuity when presented with unique circumstances.

Kirk Rouse, vice president of Leesburg Concrete explains: “We could not have turned over a completely pre-assembled structure to the school because that would not have met its needs. We took what we do well and worked with our Easi-Set team to build a strong floor base for the building, while we engineered the roof and walls to blend in with the campus and stand up to Mother Nature. This project was a learning experience for all of us, and the final outcome is a testament to our level of commitment to each customer.”

Kate Gawlik is a freelance writer based in Lockport, Ill., specializing in all things construction, design and engineering. 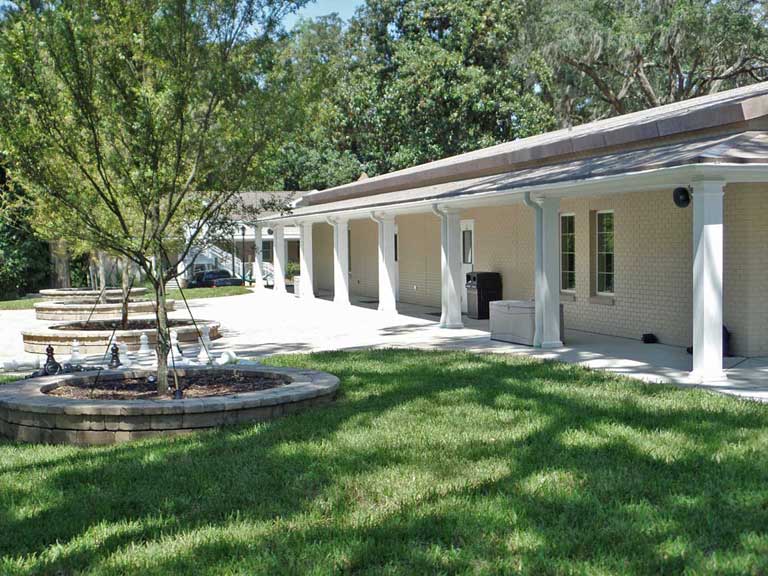