The Union Bulletin – Walla Walla, WA - by Sheila Hagar MILTON-FREEWATER — The final pieces of the Milton-Freewater Unified School District’s bond project work were lowered into place at the Grove Sports Complex on Thursday. 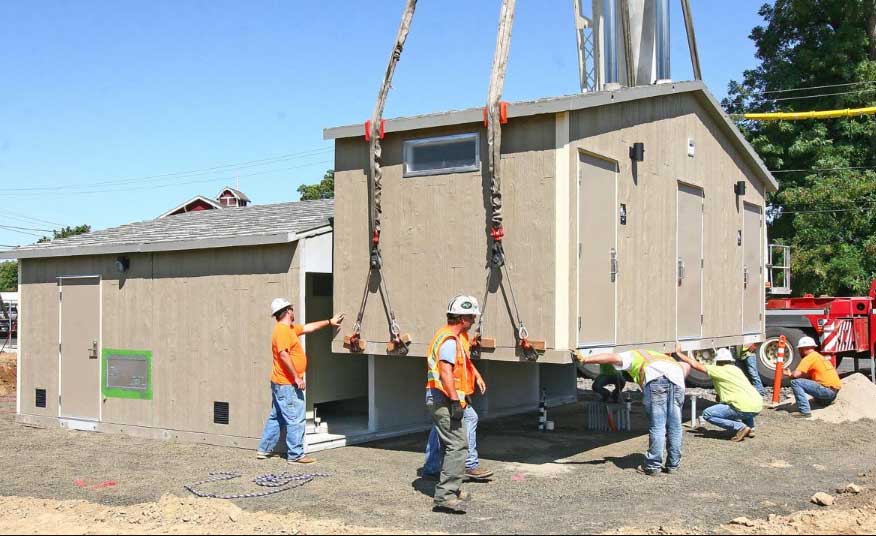 The facility was in place and leveled in under two hours, said Shawn Towne, a project manager with Kirby Nagelhout Construction.

“All in all, once we got everything coordinated, I think it went really well,” he said.

Kirby Naglehout has overseen all of the new building — including Gib Olinger Elementary School and a bus facility — as well as restorations and renovations that were part of a $33.4 million school bond project voters here approved in 2016.

Taxpayers picked up $12.5 million of the tab; the remaining funding came from a private grant and some help from the state of Oregon.

Its separate modules were characterized as “really heavy Legos” by Superintendent Aaron Duff at Monday’s board meeting.

The largest of the three weighed 62,000 pounds. The separate parts, with preinstalled plumbing and electrical fixtures, were pulled together by winched cables until the stand was one solid building, Towne said Thursday.

“These are definitely made to last,” he said.

Longevity is exactly what Duff has sought throughout the bond project, which he oversaw as the district’s business and operations manager before being named superintendent in June.

“This will be a facility the community can use for 100 years,” Duff said, noting that’s been his standard for all the bond work.

“I was really impressed. When you look in there, it looks like a great facility. That’s a dream concession stand. You can just hose it out.”

The Grove Sports Complex stands on the ground where Grove Elementary School was built in 1908 as a K-8 facility. The school’s multiple structural issues, including asbestos-laden building materials, made it unsuitable for rehabilitation, districts officials have said.

Now the site is home to two sports fields and a gravel walking path, all of which will continue to serve Milton-Freewater students and families, Duff said earlier this year.

A wet and late arrival of winter to the Walla Walla Valley delayed grass planting for the project, meaning the fields are not far enough along to support use just yet, he said.

“We’re hoping to play one soccer game there this season, but the month of February put us behind, so it’s going to be close. We want healthy grass and a healthy field, so if we need to wait until spring that’s fine.”